Once downloaded, the data can be ingested by a Delft-FEWS stand alone with the aim to bring the local datastore back in the 'original state', i.e. with a similar time series set definition as used when Delft-FEWS ran the workflow to produce the data. This exact timeseries definition is included in the netcdf files during the archive export process. The importArchiveModule has been implemented to uses this definition included in the netcdf files to put the data back in Delft-FEWS local datastore

Figure 4.16 and Table 4.10 describe the configuration details for the import module. 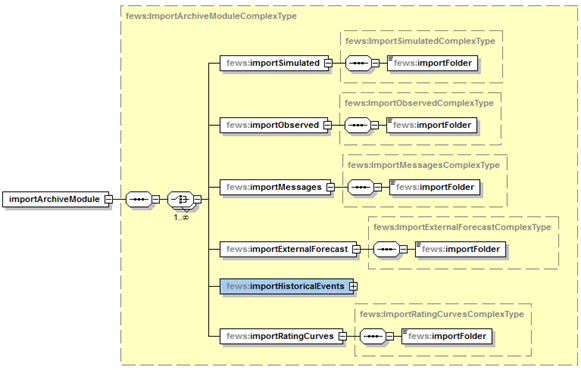 IdMapping of locations that have changed id over time

If the id of locations used in the Delft-FEWS system have changed over time (e.g. from locationId_old to locationId_new), the data can still be imported from the archive. For this you need to configure a idMap, just like your used to with the normal import Module. However, in this case you will need to make sure that the old id (locationId_old) is still known as a location in the configuration. You can either add the old id to Locations.xml or create a csv file with this (and potentially other) deprecated locationId's. The benefit of the second method is that you can add the new location id to this file, so you can use a function to map the id's instead of defining them by hand in the idMap configuration file.

Historic events are a special datatype to Delft-FEWS as they can be used to overlay on an existing time series graph. Historic events are the only datasets which can be ingested in a Delft-FEWS client server system. Normally, the archive server has a process running (the HistoricEventsExporter) which extracts historic events data from the archive and pushes them to the Forecasting Shell Server import directories for ingest in the operational database.

This import process has its own data administration process, and does not use the timeseries definition as embedded in the netcdf files. Hence an idMap may be needed to translate netcdf variables into Delft-FEWS parameters and locations. In addition, backup and failure folders can be defined to prevent loss of data in the automated process.

Figure 4.17 and Table 4.11 describe the configuration for importing historic events. This module should be executed in a separate workflow compared to the other archived datasets.