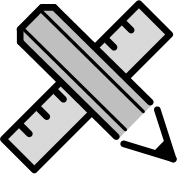 In this tool (wave penetration) you can compute wave penetration patterns travelling into a harbour basin.
The tool requires a shoreline and 2 breakwaters attached to shore (you can inspect the generic data availability in the top panel of the tool).
Optionally, any generic wave data can also be used, in order to fill the wave condition fields.

Wave penetration can be calculated in two ways, depending on the user preference. Using an analytic method, in which wave penatration is computed on a grid within the harbour basin and is based on Cornu spiral waves propagating into the harbour basin. Note that this does not take into account processes such as reflection and diffraction. Besides, also a numerical method can be selected, which uses the Diffrac2DH schemisation to find the penetration patterns of waves entering the harbour basin. This method takes reflection and diffraction into account, though only considers a (single) monochromatic wave. Results of wave penetration should however be interpreted with a considerable range of uncertainty.

Provide the design wave conditions at the haror entrance. By clicking on the (

Image Added) button, you can also select the wave climate and/or extreme wave conditions from the generic data.

Select the first and second breakwater which enclose the harbor basin. Only a harbor basin comprising of 2 breakwaters is supported.

Select which type of calculation will be performed:

More information (literature) about the internal workings of the analytical and Diffrac-2DH calculations can be found here:

The following processes are not included in the tool: wave directional spreading, bed level changes throughout the harbor, wave reflection (in case of using the analytical method) or varying reflection values (in case of Diffrac-2DH), etc.

More information on the limitations can be found through the provided literature.

Results of the wave penetration tool should therefore be interpreted with a considerable range of uncertainty.

The following files (.dsproject) can be downloaded and loaded into CoDeS to serve as examples. They are not based on actual projects, but are intended as illustration.

Unzip the files to an convient folder (but make sure the file structure does not change), and open the .dsproject file from within CoDeS.