Modifiers play an important role in the concept of interactive forecasting. By using modifiers a forecaster can manually change time series, module parameters or location attributes. After creating one or more modifiers the forecaster can run a workflow locally in IFD mode to verify the effect of the modifiers. When a modifier is created it is initially only visible for the user who created the modifier. In this case the modifier is always colored red.

Within Delft-FEWS there are 3 types of modifiersdifferent modifier types:

These 3 The different types will be explained in more detail in the upcoming sections below. The modifierTypes.xml is the configuration file that can be used to define which modifier types are available in a FEWS system. It is for example possible to define that all time series which have parameter id X can be modified by using modifier A. If a topology node is selected in the forecast tree the module config quick scanner will determine which time series, locations and module parameter files are used in the workflow of the topology node. The time series which are used in the workflow and which have a parameter X can be modified in the modifiers panel by using modifier A.

The advantage of the first option is that the model adapter doesn't have to be changed to use module parameters. The model receives a single set of module parameters in which the modifiers are already applied. In the second case the model parameter files contains the original values plus

The following config options apply to all modifier types.

In the forecast manager it is possible to approve a forecast. If this option is enabled the modifiers which were applied in this run will restored.

If an OC detects that another user committed new modifiers which overlap with local non-finalized modifiers then these local modifiers will be rolled back.

Currently there is only one type of modifier, the locationAttributeModifier, available to modify location attributes. This type has however a lot of configuration options so it can be used in a lot of different ways.

Below a screenshot of the display. 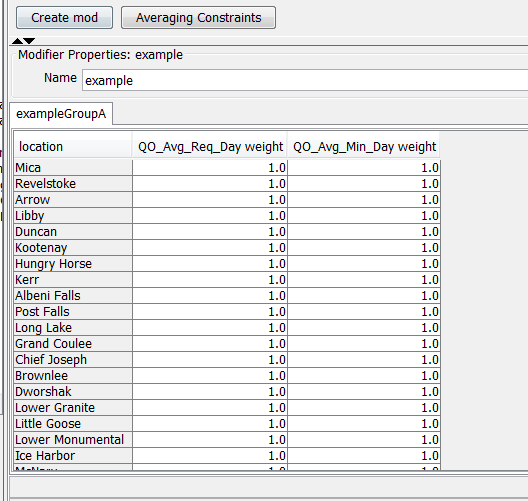 Below  Below a config example.

Because  Because there are two modifiable groups defined in the config, the display will show two tabs instead of only one.

This option is similar to the option useSystemTimeAsDefaultValue, but instead of setting the default value to the system time the default time will be derived from a time series. A time series set can be configured for this option. The first time of the time series array for which a reliable value is available will be used.

The element <selection> can be used to predefine the list of options which are available for a certain attribute. The  The predefined list op options can be defined by:

The  The display will look like the example below. 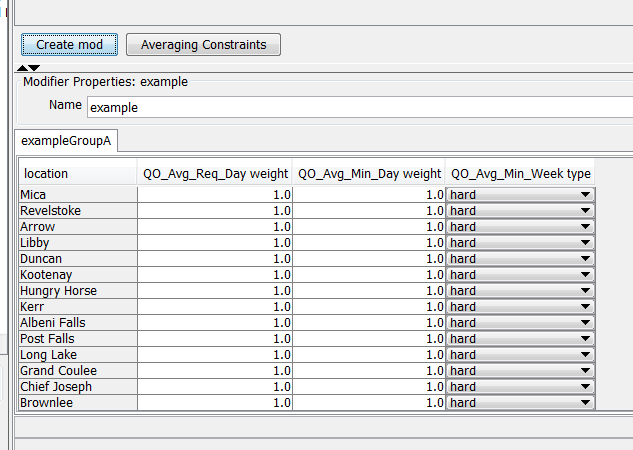 The option timeSeries can be used to define a filter. First all the time series which are  used in the topology workflow are determined. Then the found time series are filtered by using the defined filter the locations of the resulting time series are the modifiable locations for a toplogy node.

Below a configuration example of the option <timeSeries>.

Below  Below an example.

. Below an example of a modifier with the element <exportFile> configured. 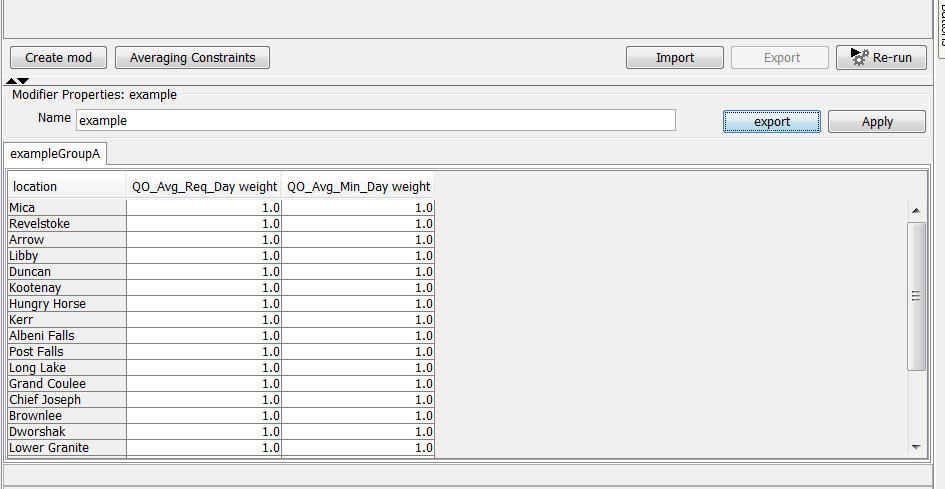 The panel layout section defines two tableLayout sections. In the template section both table layouts are positioned on the panel. In the example the panels are placed in a grid with 1 row and 2 columns. Below an example of the display.

Below an basic example of this modifier.

The configuration above declares that all module parameter files which have parameter SCF can be modified with the modifier "example".

Below an example of the display of this modifier.

It  It is possible to define a minimum and/or a maximum value for the applied changes to a certain parameter. Below an example.

Below an configuration example.

Below an configuration example.