The “Challenge Fund” (convened by GFDRR and DFID) funds about 20 projects that propose a new innovation in the field of disaster reduction. Deltares has teamed with VU Amsterdam, Nelen & Schuurmans, the Red Cross Red Crescent Climate Centre and the World Resources Institute to establish a prototype tool that can engage stakeholders to combine openly available satellite based terrain data with OpenStreetMap (OSM) features, resulting in a high resolution gridded terrain dataset (approximate resolution 0.5 to 1 meter). OSM is a crowd sourced database of geospatial elements such as roads, water ways and land uses. Detailed terrain information is prerequisite to a successful hazard mapping in urban environments with flood events, driven by local rainfall.

High resolution and local data, combined with smart algorithms are key to solving this problem. Risk identification models for local risk management stakeholders are needed that allow interaction with the data, model and results through a participatory approach.  Through an already developed new tool 3Di, such analyses have become feasible in data rich areas, allowing people to literally see water flowing at the street level and assessing much more exact which buildings and assets are at risk and what interventions do to reduce risk. However, lack of high resolution data in data-poor regions still hampers the applicability of such new technology such as 3Di in these circumstances.

In the Challenge Fund call, we have proposed to move towards high-resolution risk models in data-poor regions through fusion of globally available data and participatory knowledge from on-the-ground stakeholders. As far as high resolution data is concerned, the Disaster Risk Reduction (DRR) community has been very active already in establishing asset-level exposure data and methods to deploy these for risk analyses. One of the main developments in this direction is InaSAFE, a tool that utilizes OpenStreetMap (OSM) features to assess how many and which assets are under risk, using a natural hazard map. In this project, we have extended the utilization of the “power of the crowd” in OSM namely: to generate high resolution Digital Terrain Models (DTM) that support building flood models at street level for the simulation of inundation at high resolution. Resulting flood maps will have an unprecedented resolution and will be further utilized for risk assessment with OSM as an exposure database.

The aim of this pilot project is to establish a best-guess high-resolution DTM at the street level, suitable for very high resolution flood risk modelling. To create this we will enable a fusion of OpenStreetMap (OSM) buildings, 30 m-resolution elevation data from the Shuttle Radar Topography Mission (SRTM, or any other available satellite-based DTM), and local knowledge on the elevation of local building types around the flood-prone neighborhoods. During the project we extended the scope to roads and drainage elements. Heights of these elements as established within OSM are collected in an inventory from local knowledgeable stakeholders using a participatory approach.  The knowledge on heights of features is used with the OSM data and global terrain data using a pilot software routine developed in this project that corrects SRTM for the locally-established building heights. The resulting DTM is resampled to high-resolution so that buildings and other features from OSM can be reintroduced in the DTM as real elevated (or lowered) features. The outcome is then a highly realistic high-resolution, local DTM that shows building thresholds, streets with sidewalks, and drainage elements. For more information click here. 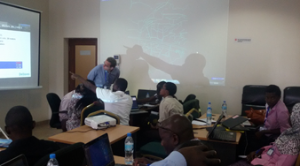 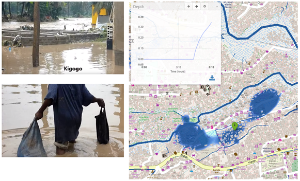