In February 1953 many dikes in the south-western provinces of the Nether­lands failed during a severe storm surge. As a consequence of this disaster sev­eral hydraulic and soil mechanical issues had to be dealt with in order to be able to draw up appropriate solutions for the breaches in the flood defences. In part the solutions consisted of repairing the dikes and in part of construct­ing closure dams in the estuaries. To study the effects of closures, small-scale experiments were carried out to obtain general information about the critical velocity for the stability of stones and concrete blocks, the over­lapping of mattresses, the water movement, and the scouring effects down­stream of revetments.

Based on a systematic investigation of the time scale for two- and three-dimensional scour in loose sediments, relations were derived for predicting the maximum scour depth as a function of time. In the nineties these scour re­lations were slightly modified and used for the design of the storm surge barrier in the Nieuwe Waterweg near Rotterdam and for the prediction of the scour process downstream of the barrier in the Eastern Scheldt. At that time the Scour Manual was prepared, concerning the scour processes and phenomena taking place near several hydraulic structures due to currents. In 1997 the handbook was completed (see cover picture below). New scour relations and experience motivated an update of the handbook. In 2015 the update was started by selecting literature that should be included in the updated version. Additionally, case studies were added, giving examples of how scour relations can be or should not be put into practise.  In 2019 an updated version of the Scour Manual has been completed and sent to the editor of the book. 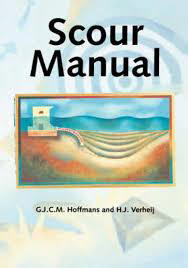