Delft-FEWS can export simulations to the archive via the ArchiveExportModule (exportSimulations activity). Typically this archiving activity is included in the workflow that computes the final approved forecast.

It is however also possible to archive a simulation from a scheduled workflow. In this case a relative period (relativePeriod in schema) should be configured to indicate which time period should be archived. In addition the workflow id (workflowId in schema) should be configured which should be archived.  It is also possible to archive the current forecast to the archive. If the export is done without an relative period but not in the workflow which created the forecast the current forecast will be exported. If you have used modifiers in this workflow you should also configure the relatedWorkflowId. The modifiers which are applied in the last run of this workflow which also be exported to archive. This scenario is typically used when the simulation is published manually after the forecast has run and was reviewed.

The associated root directory structure of the Delft-FEWS export for this type of dataset is as follows:
<archiveRoot>/<yyyy>/<MM>/<areaId>/<dd>/simulated/<workflowId><TimeZero><DispatchTime>
Where <dd> refers to the date of the forecast time T0.
This directory holds the metaData.xml as well as runInfo.xml file with the FEWS taskrun properties (see Figure 3.8). Within this directory the following sub-folders may exist:
/timeseries, /reports, /modifiers, /states
The exportArchiveModule.xsd has a dedicated exportSimulated section to configure the messages that need to be archived (see Figure 3.7). The associated specification is given in Table 4.4.
Table 4.4 Delft-FEWS export configuration for archiving simulations

*When an existing file is locked while it needs to be overwritten, the export function writes a new temporary file. The FileSweeper, a scheduled process, renames this file when the lock is removed from the original file. 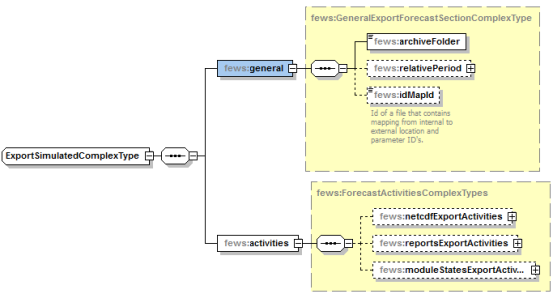