To prevent dependencies on other processes, the ExportArchiveModule is envisioned to write directly into the archive file storage. The FSS thus needs to be able to have write access to those disks. For each kind of dataset, the ExportArchiveModule checks the database for changes over a (configured) relative period. It exports any data which meets the export instructions and has changed within this period. Datasets are archived in a pre-defined directory structure, which is based on areaId, date and dataset. The schema of the associated configuration file (Figure 4.1) is defined at:
http://fews.wldelft.nl/schemas/version1.0/exportArchiveModule.xsd. 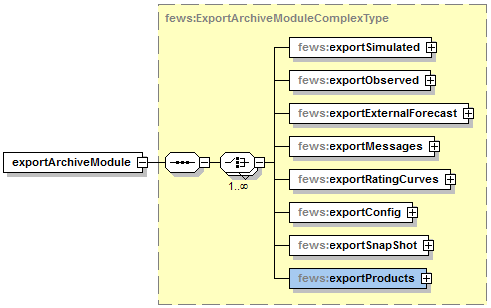 For observations a dataset is generated for every area on a daily basis. The associated directory structure of the Delft-FEWS export for this type of dataset data set is as follows:
<archive root>/<yyyy>/<MM>/<areaId>/<dd>/observed/
When Delft-FEWS generates the netcdf file, data is written to the same data block when the entire matrix is filled, i.e. all time steps are regular and none of the values is missing. For those locations with irregular time stamps, or missing values, a separate data block is used.
Within the netCDF file, each data block is accompanied by a header. Within each header a metadata item called 'timeseries_sets_xml' is included, holding the exact definition of the timeSeriesSet as the data was stored in the FEWS database. This feature allows full reproducibility of the time series via an Import workflow in a Delft-FEWS stand alone application, assuming that the associated Delft-FEWS configuration is in place.

The exportArchiveModule.xsd has a dedicated exportObserved section to configure the observed timeseries that need to be archived (see Figure 4.2). Table 4.1 documents the associated elements: