This module will be removed from the Delft-FEWS code in the 2022.02 release

To be able to query timeseries directly using SQL statements Delft-Fews can be set up to act as a jdbc server. This can be done using an OC configuration (which will log in and automatically synchronise date with the MC, thereby assuring all data is constantly being updated), or by running this stand-alone. In the latter case the system will only export what is in the local datastore at startup.

Note that the JDBC server is planned to become obsolete and to be replaced by the webservices like the PI service. Therefore no new features will be developed to the JDBC server.

The JDBC Interface provides a virtual access to (virtual) FEWS tables. The JDBC server allows a client application to query the available tables. However not all SQL query statements are supported. Also the type of SQL statements allowed on a table varies per table. See the section on #SQL queries for more details.

The following information is available through the JDBC Server. 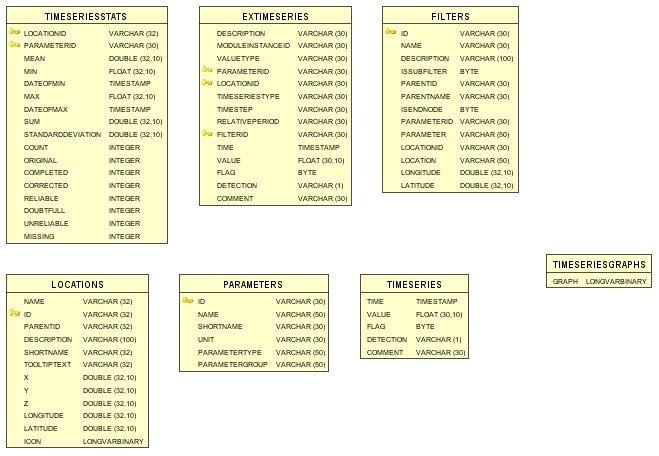 The locations table allows the client application to query the available FEWS locations.

The parameters table allows the client application to query the available FEWS parameters.

Note! It is currently not possible to query the ExTimeSeries due to bugs.

The TimeSeriesGraphs table allows the client application to retieve an image of a FEWS timeseries chart for the queried timeseries. The query returns a byte array value containing the content of a BufferedImage.

The Filters is set up as a view. This is because the Filters does not represent a FEWS table. Instead the Filters view represents the content of the FEWS configuration file 'Filters.xml'.

Step 4: Start the FewsJdbcServer by clicking on the <OC-Name>_JDBC.exe. The Server will start as an OC and synchronise its localDataStore with the Central Database using the synchprofiles of an OC.

Step 5: Stop the FewsJdbcServer by killing the application using the System Monitor. In the attachements an exe is provided that opens a console window. If this console window is stopped, the FEWS JDBC driver process is also stopped.

Install windows service
Follow the above listed steps to install and test the JDBC server. Finally stop the server and proceed with the next steps, based on the attached file JDBC service install.zip

Notice that the batch calls the file install_JDBC_Service.bat, that contains a list of the *.jar files in the bin directory. If these filenames have changed or the list has changed, this list should be updated. If not, running the service may not be successful. Also notice that your JAVA_HOME environment variable has been set and refers to your JRE directory. This JRE directory should not contain space characters in the name. If so, make a copy of your JRE to a directory with a name without space and set in the run_installscript.bat the JAVA_HOME variable to this new path.

Step 3: Take the fews_jdbc.sh script file and place this one level higher than the \bin directory.

For debugging purpose it is possible to start the JDBC from the stand-alone FEWS Explorer. With the F12 key you get a list of debug options. Select "start embedded vjdbc server". The service will start and can be accessed from a database viewer.

Setting up connection in DbVisualizer

Step 1: Install DbVisualizer on your PC. Make sure it is not installed in a folder with spaces, such as "Program Files". When there is a space in the folder name, it will NOT work correctly. This is a DbVisualizer bug that can not be solved by FEWS.
Step 2: Copy the files "commons-logging-1.1.jar" and "vjdbc.jar" to a folder on your computer. These are the drivers used by DBVisualizer. Also this folder name should not contain any space characters (use the 8.3 format).
Step 3: Add a new JDBC driver to DBVisualiser:

Setting up an ODBC-JDBC bridge

The FEWS JDBC Server has been tested with the Easysoft JDBC-ODBC bridge, this can be purchased. This allows the user to access the JDBC Server from other applications like Microsoft ACCESS that do only support ODBC. To use the JDBC driver with the ODBC-JDBC bridge, do the following: 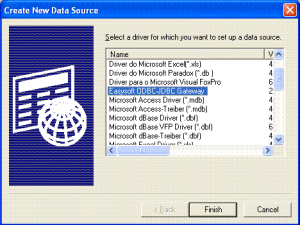 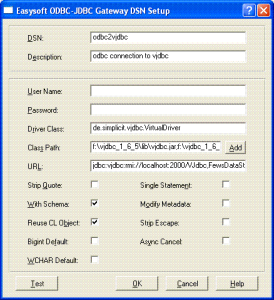 When the FEWS JDBC application runs you can test the connection using the Test button.

It is possible to have every client application (OC) to have also its own JDBC service.
Therefore you need to configure in systemConfigFiles\Explorer.xml a piServicePortRange. If configured, the OC automatically starts the JDBC service at the localhost.

If a port number in the configured range is not available anymore, the service will not start.

This can be used to make it possible that other programs use the JDBC service directly from the client PC.

There are a number of SQL queries that can be used to retrieve data from the database. Only (read-only) statements are supported. Statements must be formatted as:

For the Locations, Parameter and Filters table the SQL Query "Select * from <TableName>" is allowed. For the TimeSeries Table this query will return an error.

A valid query for the TimeSeries Table is as follows:

Or, when using filter id's:

Note ! When creating a query using the clause time BETWEEN '2007-03-17 13:00:00' AND '2007-04-01 13:00:00', then it is good to realise that the start time is used as system time for retrieving the timeseries data. This could be important when retrieving 'external forecasting' data with an 'externalForecastTime' later than the start time.This will result in no data being returned.

Return all location and parameter combinations from a specific filter

Return all locations from a specific filter

The Time series can be queried with or without the Filter ID. An example of a query without using the filter ID is:

The same query with the use of a filter ID will be as follows:

The Time series can be extracted from the database as a graph (binary obejct) through the Timeseriesgraphs table. Queries with or without the Filter ID can be used, similar to the time series table. An example of a query with the use of a filter ID is:

By default the graphs have a size of 300 (width) * 200 (height) pixels. In the SQL query the width and height can also be fixed.

As from 201001 it is allowed to combine data from different locations and/or parameters into one graph by 'joining' them using OR-operators. Such a clause with OR-operators must be put in between brackets:

As from 201001 it is possible to optionally specify the time zone for the resulting graph; time clauses in the query remain to be specified in GMT.

Example of a graph query which will plot the data in GMT-1:

Here follows some example code of how client applications can set up a connection to a JDBC server hosted by a FEWS OC.

Setting up a connection in JAVA

No special jars other than the ones provided by the JRE are required.

By default the port number of the JDBC Server is 2000. It is possible to use a different port number when starting the application. In the global.properties a property can be added like this:

This will start the JDBC Server on port 2078.

When the FEWS JDBC Server is started, the OC rolling barrel configuration will not be used. Instead the Rolling Barrel will run once a day at 02:00 GMT. After the FEWS Rolling Barrel, the compact Database script (only for MS ACCESS databases) will also be executed automatically.

JDBC Client applications like DBVisualizer adopt timezone settings from the (local) Operating System.
This means that data is converted (from FEWS GMT) to local timezone. When DLS conversion is active, a query on data from the night that DLS is switched (zomertijd to wintertijd, when clock is set back a hour) results in 'double' timeseries records between 2:00 and 3:00 AM.

When starting DBVisualizers JVM with -Duser.timezone=GMT results are in GMT, without DLS conversion.