Barrier states should be defined

While evaluating the decision logic, relevant input may consist of information from both the present and future model state.

Some examples to illustrate the above:

Furthermore, the decision logic should be "scalable" (i.e. it should be easy to add additional rules). If we continue with the above example, a decision rule could also be

With regard to decision logic, we can differentiate between two different types of criteria in the above example:

As the decision logic takes both "future" information (if there is a high water event in our forecast horizon, do ...) and information not included in the model state into account (in the above example, both the discharge at location C and the "shipping state" are not included state of the running model), we cannot evaluate the decision logic based on triggers in this model. As such, we want to do this in an external module (i.e. FEWS in this case).

When evaluating the decision logic, it is relevant to take into account the fact that the model state will change after the barrier state has been updated (changed). To evaluate the decision logic for subsequent steps in the process, this implies that we will need to re-run the model to take this state change into account. Also, if there are multiple barriers in our area of interest, this implies that if the state of one of these barriers changes, we need to update our model simulation before we can assess the decision logic for the other barrier(s).

The entire process can be summarized as follows: 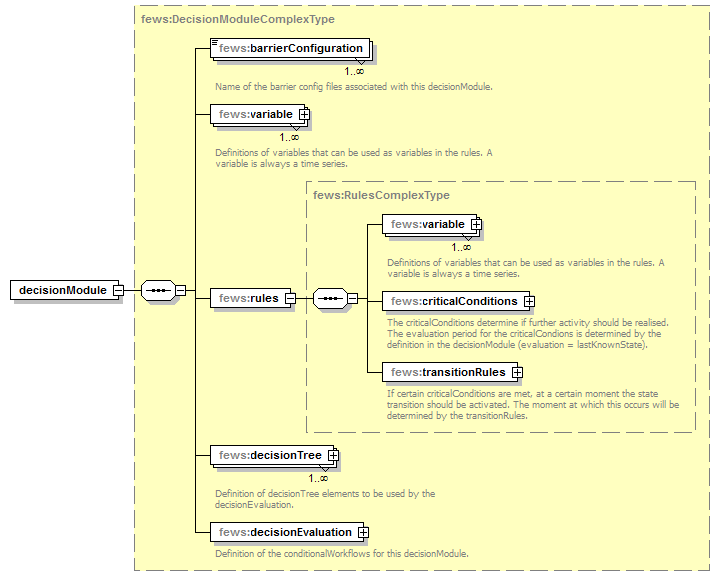 required element used to identify the time series in the decisionModule block or in the rules block.

The Rules section defines the rules which will be used by the decision entries of each decisionTree. 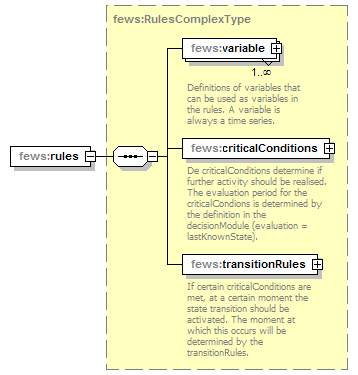 This section contain a set of variables defined only for the rule definitions. For a description of the variables see the section above.

If certain criticalConditions are met, at a certain moment the state transition should be activated. The moment at which this occurs will be determined by the transitionRules.

For each barrier a decisionTree is configured. Each decision element in this decisionTree should be unique (i.e. at each moment in time only one element can be valid). 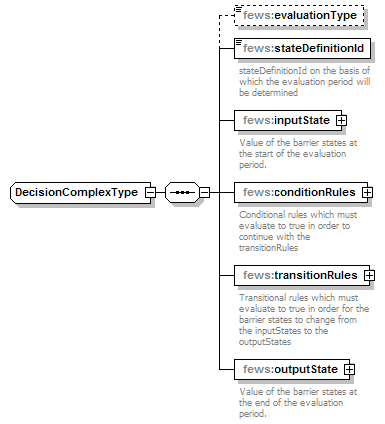 The last section of this file deals with the evaluation of the decision logic. If we are in the first step of the iterative loop, the last know system (barrier) state is used as initial value. The section within the 'initialConditionalWorkflow' tag is run, where the timeSeriesSets associated with the variableId's are used for initial values. From this workflow the (external) model is called (for example, a workflow through which Sobek is run from the FEWS General Adapter).

After running the model for the first time, we need to evaluate the decision logic prior to a (possible) second run. If a state change occurs in the decisionTree, we need to run the model again taking this state change into account. From the second iteration and onwards, the section within the 'conditionalWorkflow' tag will be run. Note that we need to evaluate three state changes in this case (SVKH = the position of the Hartelkering, SVKW = the position of the Maeslantkering and scheepvaart = the "shipping state"), each of which has a separate decisionTree definition.

If one state variable changes value, this will change the overall system state, and hence may effect the evaluation of the other state variables. There are to options which can be defined: