In order to define a What-if Scenario, the button [Add New Scenario] should be pressed. Next a name or ID for the new what-if scenario must be entered in the "Scenario Name" field; it is advised to use a short name. When running a What-if Scenario, the name of this scenario will be added to the forecast name. The scenario can also have a description, this can be used to enter more information on the newly added scenario.

Four types of What-if Scenarios can be defined: 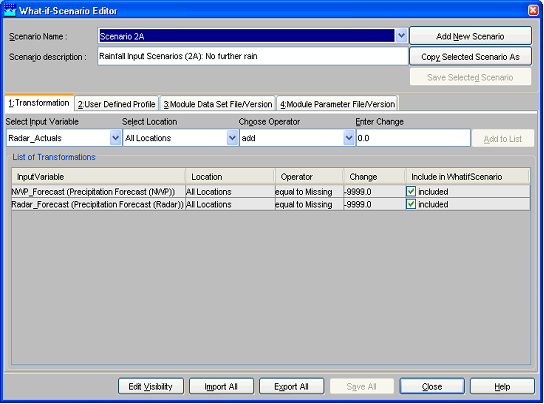 In the field Select Input Variable , an input time series can be selected from a drop-down list for transformation.

In the next step, the user has to choose whether to apply the transformation to a single location or all locations for which the selected transformation variable is available.

Finally, the transformation itself is defined by selecting a mathematical operator and a value in the Choose Operator and Enter Change fields. The following operators can be entered: add, subtract, divide, multiply. Also a constant value can be entered and a time shift.

The buttons [Import All] and [Export All] allow saving and retrieving of sets of what-if scenarios when the local data store is renewed. The display can be left with [Close].

What-if Scenarios can be run via the Manual Forecast Display. 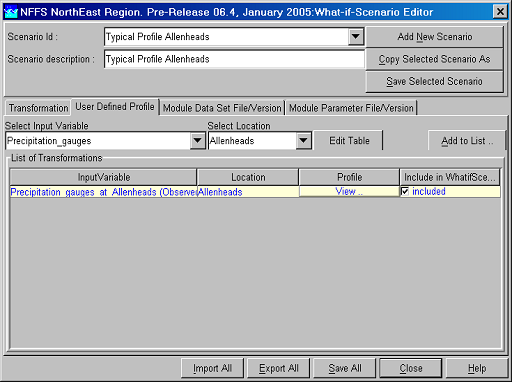 Select the "User Defined Profile" and select the input variable and location where the typical profile will be defined for. Now the values of the user defined profile must be entered in the data store through the special table editor, press the [Edit Table] button. 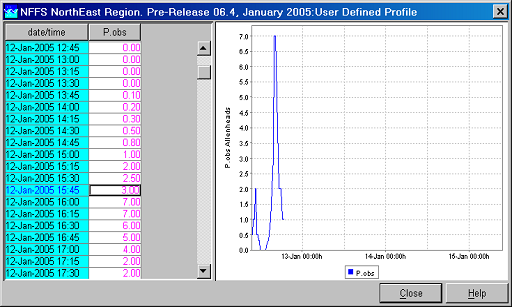 The table includes a spreadsheet and a graph showing the entered values. Values can also be copied from other programs like Microsoft Excel by using the [CTRL+C] keys. When all data is entered, press the [Close] button.

By pressing [Add to list], the user defined profile is added to the What-if Scenario and appears in the table at the bottom of the tab. A number of profiles can be defined within a single What-if Scenario by repeating the sequence described above.

The buttons [Import All], [Export All], [Save All] and [Close] function similar as described in the section above. The import button is only enabled when all new scenarios have been saved. In case during the import a conflicting whatif scenario is encountered that has different settings a confirmation screen may be prompted to deal with this situation.

This tab allows the user to select alternative module datasets. The general usage of this type of What-if scenario is similar to the previous types. 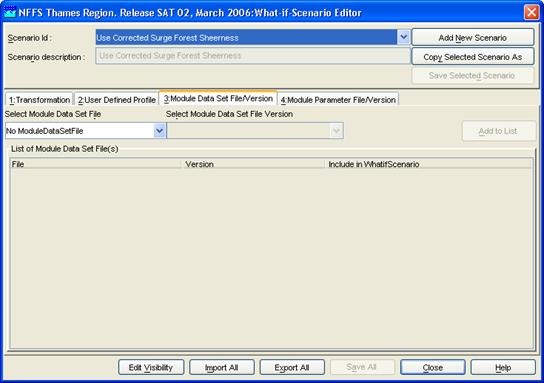 The buttons [Import All], [Export All], [Save All] and [Close] apply in the same way as described above.

Click the [Edit Visibility] button to edit the visibility of the What-if Scenarios in the system or delete them.

What-if Scenarios marked with an asterix (*) are persistent, indicating that they both can not be deleted or made invisible. The visibility can be set to expiry by selecting a number of items and then selecting an expiry time. 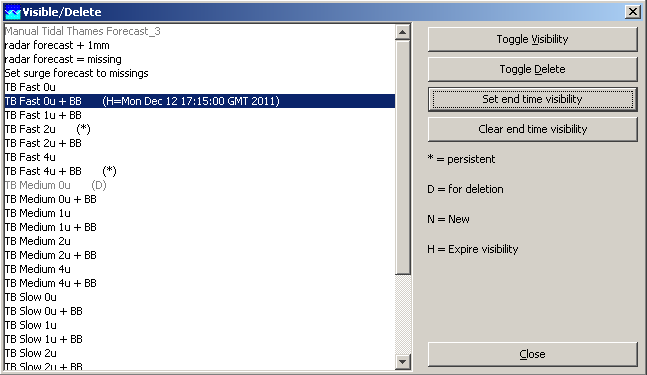 With [Import All] you can import what-if scenarios from file.

With [Export All] you can export what-if scenarios to file.