The dashboard display - available since Delft-FEWS 2019.02 - is used to view several displays side-by-side. The functionality is limited to time series plots (selected via the data viewer), display groups, grid (or spatial) displays, and buttons panel displays. For example, it can be used to view both a precipitation and a temperature grid plot side-by-side, synchronizing the time sliders. Or, as another example, it could be used to see display groups together with a spatial display.

All users can create and modify their own dashboards, which will be stored in the user settings. Alternatively, a configurator can configure "predefined" dashboards which will be the same for all users. An example of a dashboard display is shown below. Creating and modifying a Dashboard Display

Dashboard panels can be created and modified by the user to suit their needs.

A new Dashboard can be created through the menu option of the dashboards menu in the FEWS menu bar:

After entering a title and confirming, a new (empty) dashboard panel will be opened and it will be added to the dashboards menu. 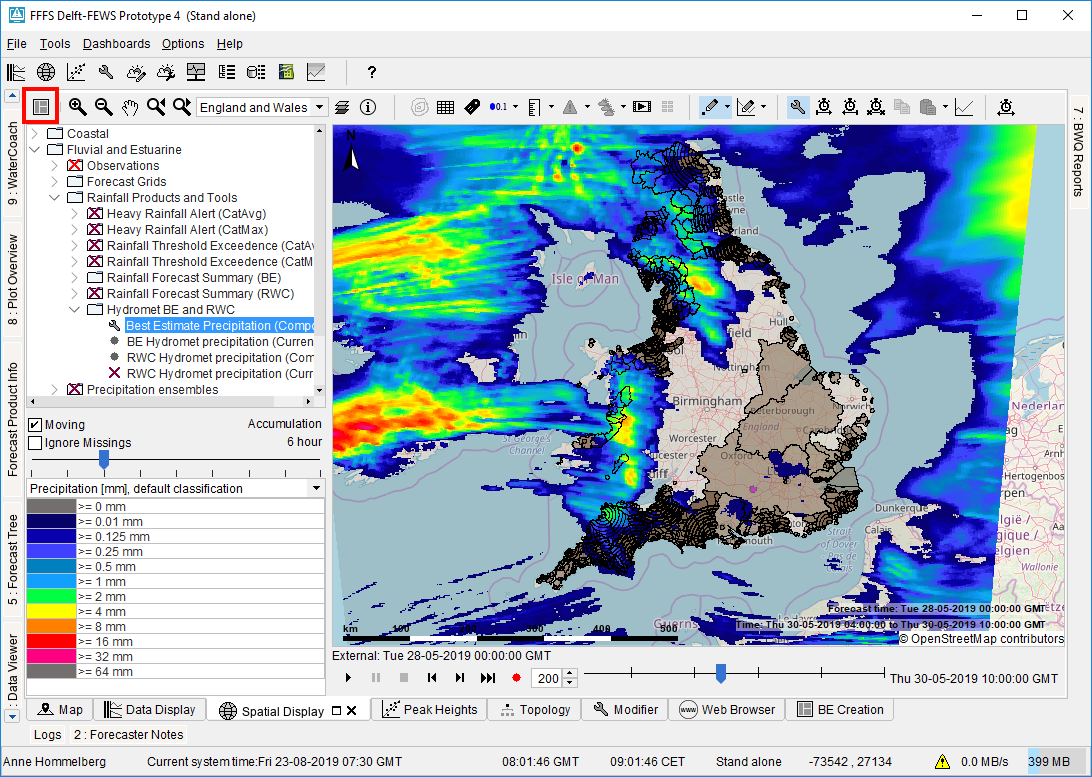 After adding a frame to a dashboard, the dashboard to which it was added will be brought into focus automatically. 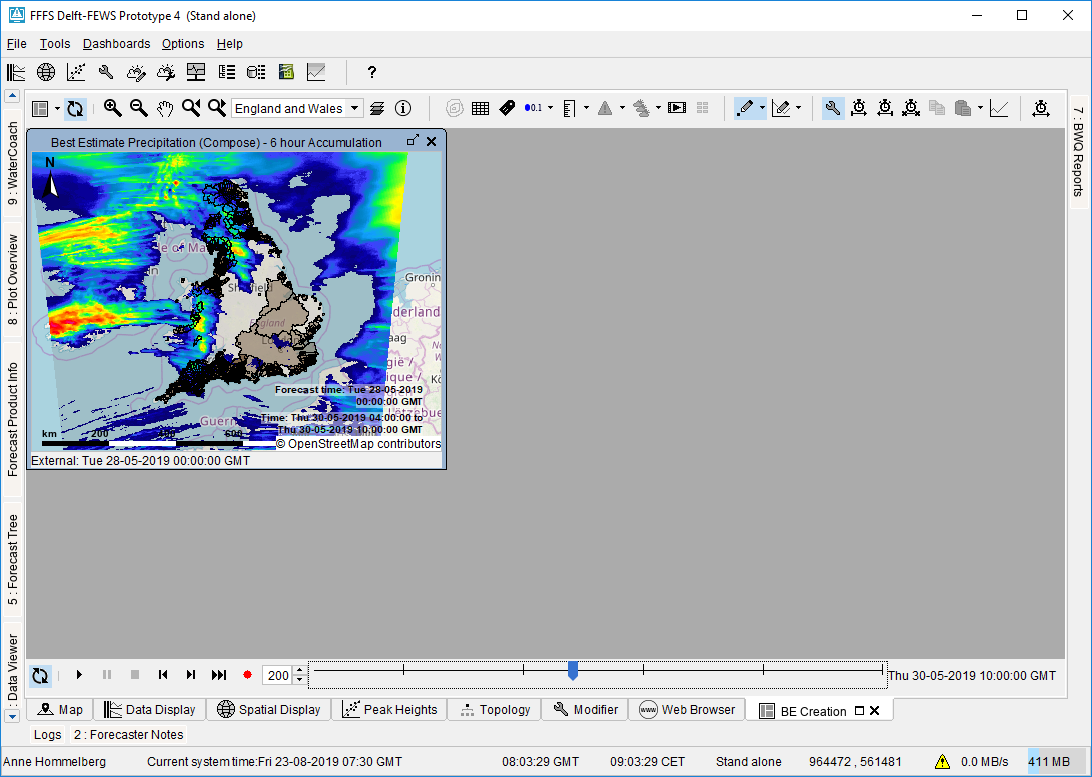 While it is possible to later modify the contents of the frame, for example, to select a different grid plot or change the accumulation, it is advisable to set these as you want them to be before adding a copy of the spatial display to the dashboard.

It is possible to add frames from the Time Series Dialog to a dashboard, the graphs can be either based on Display Groups (since 2020.02) or the Data Viewer selection (since 2021.02).

In order to do this the "Add to dashboard button" on the top left of the Time Series Dialog can be clicked.

For this to work a dashboard already needs to be created and opened.

Spatial Display frames will only show the map and plot. To gain access to the plot tree, accumulation slider and legend, a frame must be maximized. This can be done by clicking the maximize button on the frame, or double-clicking its title. By maximizing a frame, its plot selection and accumulation can be changed. When restoring the frame to its original size (by clicking the restore button or double-clicking its title), the left panel will be hidden again.

Maximized frames also have access to the spatial thumbnails

, these will be automatically hidden (and the button will be disabled) when the frame is restored to its original size.

Dashboard frames can be dragged and resized using the header and borders in fixed steps ('shift + space' toggles fixed step and free dragging and resizing). The drop-down menu of the 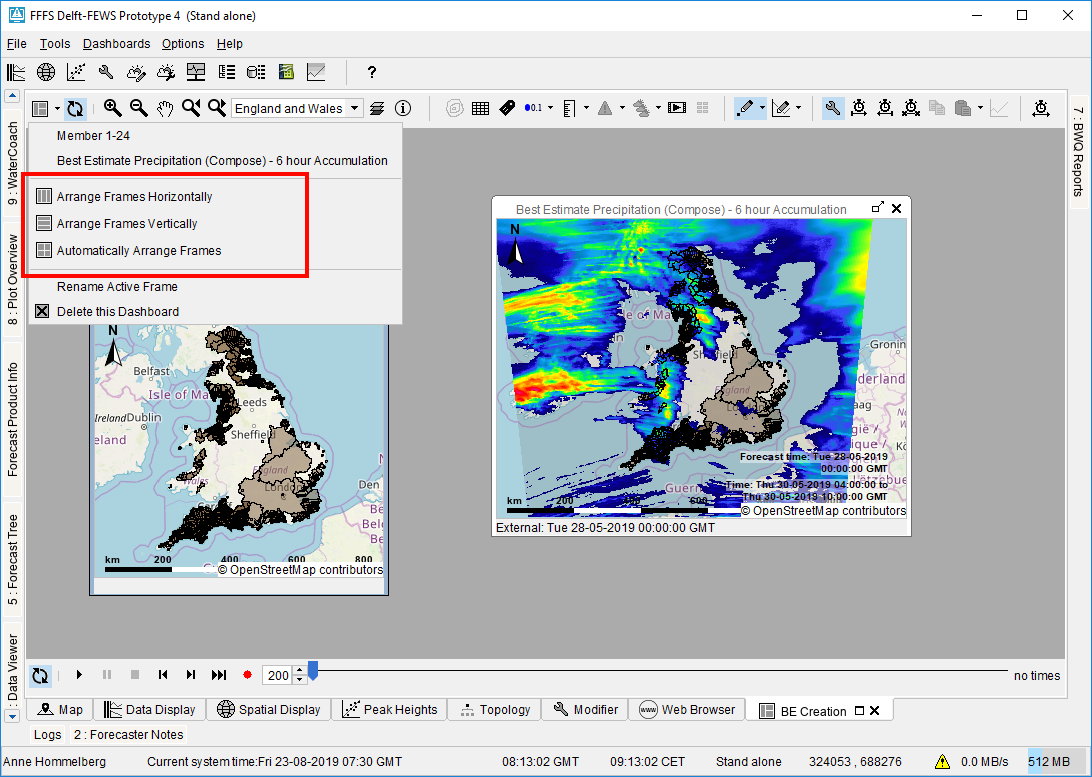 This option will arrange all frames from left to right, giving each an equal amount of horizontal space. The frames will be kept in the same "left-to-right" order they are currently in.

This option will arrange all frames from top to bottom, giving each an equal amount of vertical space. The frames will be kept in the same "top-to-bottom" order they are currently in. On newly added frames, the title will always be constructed automatically. The title of such a frame is the name of the grid plot, followed by the selected accumulation (if any). The title is updated automatically if the grid plot or accumulation is changed. Since several grid plots may have the same name, it is possible to give custom titles to frames. To do so, first select the frame you wish to rename and then use the "Rename Active Frame" option in the dashboard drop-down menu. Once a frame has been given a custom title, it will always have that title even if the grid plot shown or the accumulation is changed.

Frames in predefined dashboards can be closed as well, but upon closing and reopening the dashboard, the frame will reappear as it was defined in the dashboards.ini file.

It is possible to hide dashboards from the menu bar. To do so, specify the following in the Explorer.xml:

In addition, make sure the dashboard.ini file, containing the predefined dashboards, is absent!

When dashboards are hidden, the dashboard-button in the grid-display disappears as well.

Dashboard management panel also enables the current user to rename or delete a private dashboard. Especial characters such as "[( : , )]" are not allowed when renaming a dashboard.

Before the Dashboard management panel is opened, and after the OK button is pressed, the current state of user_settings.ini is stored in the data store for the purpose of synchronizing the dashboard states. 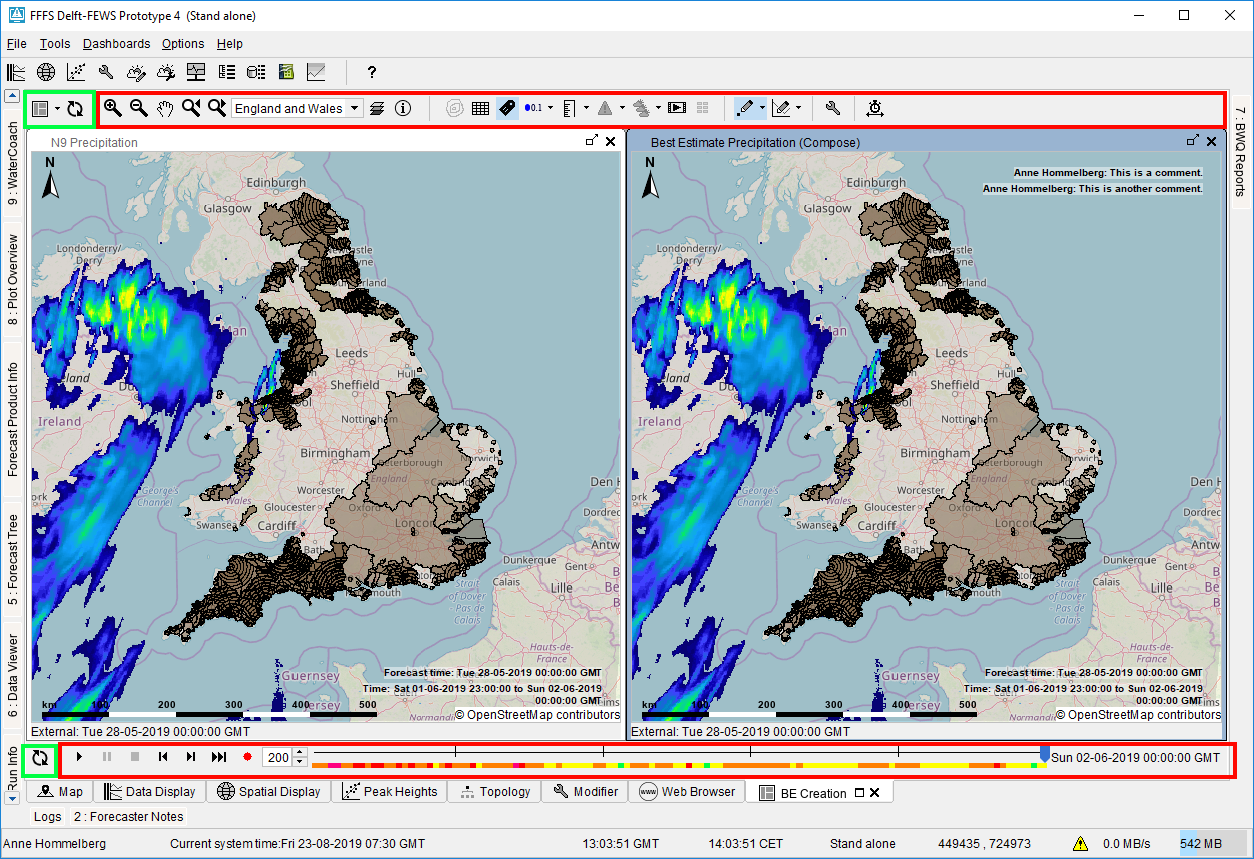 Since the right-frame is active (and synchronization has been turned of), using any of the buttons in the toolbar sections marked red will only influence the contents of the right-frame. If the user wishes to change something for the left frame, they must first select the left-frame to get access to its toolbars (the grid display button sections will then be replaced by the toolbars of the left grid display and only influence the left frame).

The dashboard panel can synchronize the times or map extents of its frames.

This option works best if all frames are roughly the same size. It may also be wise to turn this option off while manually rearranging frames, since changing the frame sizes will cause constant updates of the zoom level which are then propagated to the other frames, using a lot of resource to repaint the maps and making FEWS run slow.

synchronize button in the bottom toolbar controls whether the times of the frames should be synchronized. When this button is on, changing the selected time on the time slider, or starting the animation through the play button, will also update the times of the other frames. This allows the user to quickly compare the same time steps in different plots. When this button is on, pressing the Apply button in set time dialog

makes all other dashboard frames to have the same period.  (In a given frame, using the scroll wheel, the user can zoom in and out, and thereby change the period of a given frame, which can be applied to the other frames using the sync button and set time dialog.) 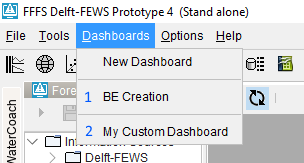 It is advisable to always check if the dashboard looks as you want it to look when (re)-opening it, before turning it into a predefined dashboard.

It is possible to assign a permission to predefined dashboards to control which users will be able to access it through the Explorer.xml. More information on this is found at Configuration Guide > System Configuration > FEWS Explorer > Predefined Dashboards.