Since its introduction in 2002/2003, the current generation of the Delft-FEWS operational forecasting platform has found application in over forty operational forecasting centers worldwide. The platform is used to link data and models in real time and to produce forecasts on a daily basis. In some cases it forms a building block of a country-wide national or even international forecasting system using distributed client-server technology. In other cases it is applied at a much smaller scale on a simple desktop workstation, providing forecasts for a single basin. The flexibility of the software in open integration of models and data has additionally appealed to the research community. 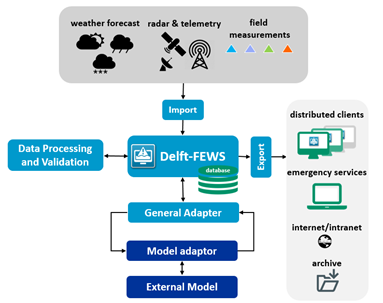 Delft-FEWS provides an open shell system for managing forecasting processes and/or handling time series data. Delft-FEWS incorporates a wide range of general data handling utilities, while providing an open interface to any external (forecasting) model. The modular and highly configurable nature of Delft-FEWS allows it to be used effectively for data storage and retrieval tasks, simple forecasting systems and in highly complex systems utilizing a full range of modeling techniques. Delft-FEWS can either be deployed in a stand-alone, manually driven environment, or in a fully automated distributed client-server environment.

The modular architecture of Delft-FEWS is of major importance as it allows making maximum and cost-efficient use of past investments in a diversity of modelling solutions such as HEC, MIKE, HBV, SOBEK etc. Modelling traditions and systems can thus be accommodated and allowed to continue.

In general the main advantages to work with Delft-FEWS are:

The current version of Delft-FEWS is built on the past experience from forecasting systems that Deltares developed for Sudan, Pakistan and Czech Republic during the 90s, as well as for the Dutch government for the Rhine and Meuse. Already then, the need for a separate GUI, data and model was recognized and the concept of model adapters was applied.

Around 2000, the first Delft-FEWS software was developed, based on Java, initiated by various projects like the European Flood Forecasting System, FEWS Switzerland, Rhine and Tanshui (Taiwan).

In 2003 the Delft-FEWS 2.0 development was started as base for the National Flood Forecasting System (NFFS) in England and Wales. Some fundamental choices were made with respect to the system architecture, which resulted in a complete redesign, like: