The rating curve parameters are stored in the database. A rating curve is valid for a certain period of time. Each curve can be described by at maximum 5 sets of parameters valid for a specific water-level range. The curves may be of the parabolic or of the power type equation. 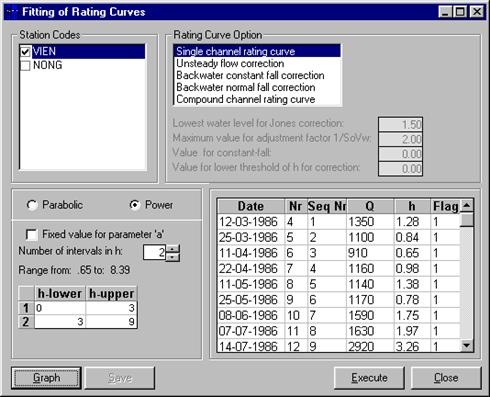 Full reports of the quality of fit can be obtained and linear and double-logarithmic scale plots of the stage-discharge data and rating curve.

In addition to the above options a procedure is included to quantify shift adjustments on water levels to account for river bottom variations in the stage-discharge conversion.

Before computation
A graph-out of the stage-discharge data together with linear and double-logarithmic plots are useful prior to the determination of the parameters of the rating curve:

It is advised to use approximately the same amount of data points per unit of depth in the determination of a set of parameters of a rating equation applicable to a certain water-level range.

When unsteady flow and backwater effects are negligibly small the stage-discharge data can be fitted by a single channel relationship, valid for a given period of time and water level range.

Following rating equations can be applied:

The coefficients a1 , b1 and c1 of the parabolic equation are determined by the least squares method. The shift parameter a2 in the power equation is either input or determined by an adapted Johnson method. A computerised Johnson method (see for a description of the method e.g. wmoOperational Hydrology Report no. 13, 1980) is used to get a first estimate of a2 and subsequently the coefficients b2 and c2 are determined by the least squares method applied to the logarithms of Q and (h + a2 ). Next the estimate for a2 is varied within 2 m around its first estimate to obtain a set of parameters for which the mean square error is minimum.

Each rating curve may consist of at maximum 5 equations (5sets of parameters valid for specific water-level ranges).

Now let the rating equations for two successive water-level ranges be given by Q = fi-1 (h) and Q = fi (h) respectively and let the upper boundary used for the estimation of fi-1 be denoted by hui-1 and the lower boundary used for the estimation of fi by hli . To force the intersection between fi-1 and fi to fall within certain limits it is necessary to choose: hui-1 > hli , hence to use a certain overlap, see the underneath figure. 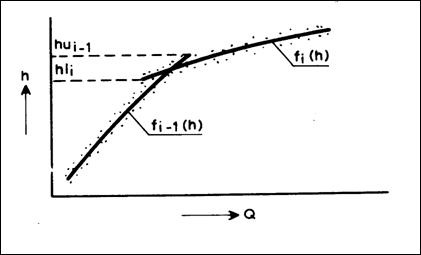 The intersection between the equations is determined by computing the roots of a quadratic equation (parabolic type) or by the Newton-Raphson method, which is continued until the absolute difference between successive estimates of the intersection is less than 0.0001 m.
With respect to the intersection, 3 possibilities exist:

In the error analysis the difference in measured and computed discharge as well as the relative difference are presented, where the latter is computed from:

The standard error Se follows from:

The standard error is given for each rating equation separately as well as for all equations over the full range of data.

The standard error of the mean relation Smr is computed from:

where:
t = Student t-value at 95% probability
P = value dependent on type of equation
with: P = hi for parabolic equation
P = ln(hi + a2 ) for power equation

If the rate of change of the water level is high the stage-discharge relation will not be unique but it will show loopings for the rising and falling stages. Omitting the acceleration terms in de dynamic flow equation the relation between the unsteady discharge Qm and steady discharge Qc , see also Figure, is given by the Jones equation: 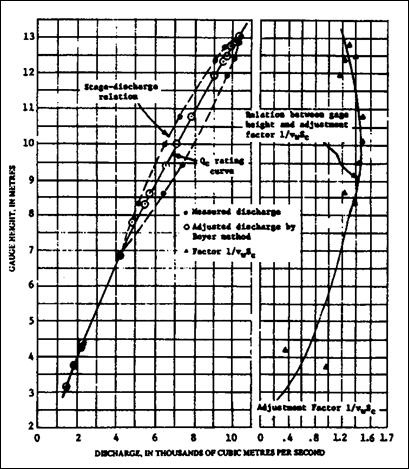 The factor 1/S0 vw [day/m] varies with the water level. This factor is fitted by a parabolic function of h:

for h > h min
with:
h min {} = the lowest water level for which the Jones correction has to be applied.

In addition to hmin a maximum value for 1/S0 vw has to be entered as well to avoid that unacceptably high values of 1/S0 vw take part in the fit of equation. Remember that 1/S0 vw is expressed in [day/m]!!

Stage-fall-discharge or the twin gauge station fall-discharge methods are used to include backwater effects on stage-discharge ratings. hymosincludes:

In these methods the fall F between the water level at the discharge measuring site and a downstream station is considered as an additional parameter, to account for the effect of water surface slope on discharge. Both methods are based on the following equation:

In this method the reference fall Fr is taken as a constant. A special case of the constant-fall method is the unit-fall method, where Fr = 1 m is applied.
In the computational procedure a value for Fr is assumed. Then a rating curve is fitted to the values:

according to the standard procedure outlined in the previous section. The value for p is optimised between the boundaries 0.4 and 0.6 based on the least squares principle.

In the plot the fit of Qr to the rating curve is shown, whereas in the error analysis the measured discharge Qm is compared with the computed discharge according to the above equation.

In this method the reference fall Fr is modelled as a function of the water level: Fr = f(h). This function is represented by a parabola:

valid for h > hmin , where hmin is a lower threshold of h above which the backwater correction is applied.

Next all remaining data above hmin with flag =1 are used to fit a parabola to the reference fall computed as:

where Qr is the reference discharge Qr = f(h) computed from the backwater free stage-discharge data. The parameter p is optimised between 0.4 and 0.6.

To execute the <Fitting of Rating Curve> function the following selections must be made.

Select a station by clicking the checkbox in the stations list. HYMOSwill extract all Stage-Discharge data for this station within the specified period from the database and place them in the spreadsheet on the form. The specified period is the processing period defined in the <Time> tab of the HYMOS main window.

From the data in the spreadsheet a graph can be made by pressing the <Graph> button on the <Fitting of Rating Curve> form. All water levels and discharges on dates with a 'flag' not equal to zero will be presented in the graph. In the graph window the user can select to view the data on a linear or logarithmic scale. There is also the possibility to subtract a fixed value from all the water levels, for example the gauge zero value. This allows the user to better analyse the stage-discharge data on a logarithmic scale when the water levels have a reference which is much below the measured values. By clicking a point in the graph a label with the number of the stage-discharge data will be shown in the graph next to the selected point. By clicking the point in the graph again the label will disappear. By holding the shift key pressed on the keyboard and selecting the point in the graph the flag of the selected point will be set to zero in the spreadsheet.To exit this graph window press the <Close> button.

Select what kind of function you want to fit and enter the number of interval levels with their minimum and maximum values.

After you made your selections press <Execute>. HYmoswill fit a rating curve through the data and present the results as a graph, table and report. To show the graph on screen select <Graph> from the functions tab of the HYmosmain window. To analyse the report press <Report> from the functions tab.
If you are satisfied with the result you can save the rating curve by pressing <Save> on the <Fitting of Rating Curve> form.

Note
Only one rating curve type can be saved to the database for a specified period. If a rating curve relation already exists for the same period, Hymoswill ask to overwrite the existing relation in the database.