To start of the sprint session Fedor Baart (WL) outlined the Delft Hydraulics standards for group programming, version control (subversion), issue management (JIRA) and information sharing (Confluence). Mark van Koningsveld (WL/TUD) outlined how the McTools initiative adheres to these standards. The first part of the morning was used to introduce everybody to these tools. Next several issues were addressed in small dedicated teams. 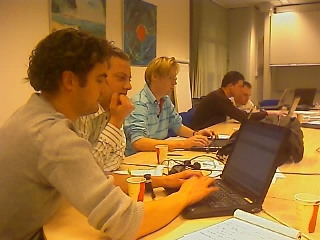 In the foreground Robin Morelissen (WL) and Gerben de Boer (WL/TUD)(who due to a complete lack of a short term memory had to be nicknamed Goldfish) are working on the McTools structure. They are merging new tools into the toolbox and carrying out maintenance on the existing structure.

Behind them Jaap van Thiel de Vries (WL/TUD) is working on the XBeach interface in DelftAlmighty. The work done will make it possible to combine Delft3D and XBeach in studies into coastal hazards that occur as a result of storms and stormsurges. 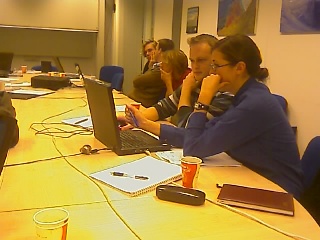 In the foreground Jamie Lescinski (WL) and Ben de Sonneville (WL) are working on routines for the analysis of transect data and nourishment data for a paper on nourishment effectiveness. The efforts are aiming to unite work carried out in de VOP framework and work carried out in the Delft Cluster project Sustainable development of North Sea and Coast.

In the back Mathieu de Schipper (TUD), Sierd de Vries (TUD) and Maarten van Ormondt (WL) are working on DelftAlmighty trying to include their approach to online wave forecasting.

The morning of Friday the 7th was used to exchange information about existing tools.

This morning session was perceived to be very useful by everyone attending. It turned out that everybody was positively surprised by the amount of useful tools that is already available throughout WL. It was suggested that such an informative session should be repeated for a much larger audience than the current app. 15 people. It outlined again the value of a project exceeding initiative like McTools.

The afternoon was spent on finalising the work started on thursday and discussions regarding the McTools efforts and the MorphAn project by RWS. It appears that all lights are on green to include the basic business logic routines on volume analysis for transects and dune erosion into the new MorphAn application that is currently being developed to support coastal managers in the management of sandy coasts. 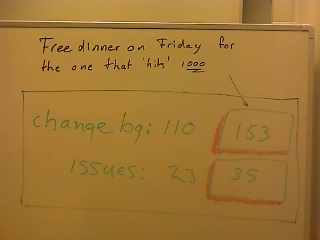 The sprint session started off on thursday with writing the lastest status of subversion (changelog: 110) and JIRA (issues: 23) onto the upper right-hand corner of the whiteboard. A free dinner was promised to the first one who would hit 1000 logged changes in subversion. In the end the counters stopped at 153 and 35. This was mainly due to the fact that new routines that where checked-in in bulk would receive only one changelog. Nonetheless the meeting was considered very succesful. The award remains to won at a later sprint session.

The session was closed around 18:30 after which everybody headed towards Cafe de V to celebrate a very productive and informative McTools sprint session.