Please note that the lines in Figure 1 are based on observed rainstorms over a period of 30 years. The number of rainstorms in this period is almost 6000, where a rainstorm means that at least some rain was recorded. The higher the total volume of a rainstorm is, the less frequent it is exceeded. Hence, the lines in the figure are much more fluent for low return times (left parts of all figures) than for high return times (right parts of the all figures).

For determination of the SDF curves of the model area and for determination of the effects of adaptation measures we have to identify separate storm events. To this end we apply fixed periods between storage events and rainfall events. And we prefer using hourly data or even shorter intervals because of the rapid runoff characteristics of urbanized areas. By definition in the UWM, rainfall events are separated by 6 hours without rainfall and storage events are separated by a single time step without increased open water storage.

For each defined storm event the following parameters are determined:

Steps to determine runoff factors for adaptation measures are:

Please note that the runoff frequency reduction factor is not obtained from scientific derivation, but an interesting finding from the empirical graphic method.

Normally an adaptation measure in urban areas will be applied to adapt runoff from paved areas. For the translation of the factor of the measure inflow area to the project area we assume that the inflow area of runoff water to the measure totally consists of paved area (Figure 3). 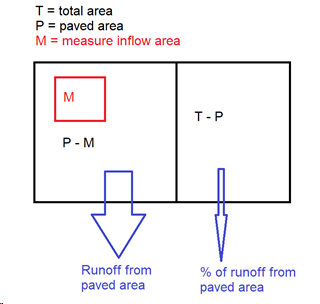 Part of the project area T (total area) consists of paved area P. The rest of the area T – P consists of unpaved area and open water. Fast runoff in urban areas is the runoff that can cause flooding. Most of the fast runoff will come from paved areas. Unpaved areas will mainly generate slow runoff (via infiltration and groundwater flow) and only generate fast runoff when both the infiltration capacity of the soil and the storage capacity on the soil surface are exceeded and/or when the soil is completely saturated. Open water, as defined in the urban water balance model, only has fast runoff, which is basically direct rainfall.

Based on these assumptions we can translate the runoff return period factor for the measure inflow area to a factor for the entire project area by applying the following formula:

This formula differs from the applied formula in the first version of the AST:

The new formula will result for the same measure into a factor for the total area of 1.048, leading to a return time for the normative runoff of 2.09 years. Since the calculated factors can exceed 100 by far, the differences can even be a lot larger.

In less extreme conditions, regarding measure inflow area and accompanying factor, the differences between the old and new formula are a lot smaller.

If multiple measures are applied in a project area the resulting factor can be determined by multiplying the individual factors.