03 Analysis of a Configuration

As of release 2007/01 the Analysis function is no longer available.

Analysis of a Configuration

To analyze a configuration, activate the Analysis tab of the Configuration Manager. 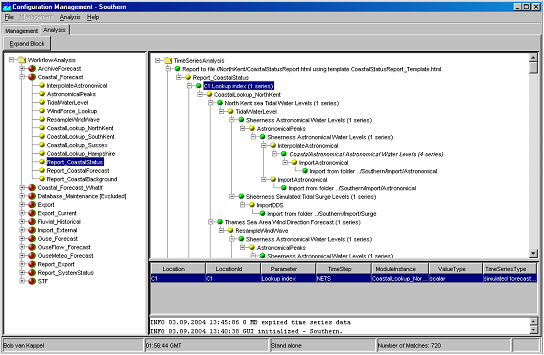 For each of the timeseries in cascading order the following questions are answered:

This procedure is recursively followed through until for example an import module instance is encountered. Following this through allows broken links, unexpected starts or ends to be easily found in a configuration.

When the Analysis mode is selected, a database of all timeseries is created. This involves that all module instances are analyzed for all the timeseries that are created and that are required within each module instance. For a selected module instance the input and output timeseries are matched in order to build the analysis tree.

The configuration files have been made such that a large amount of freedom is given to the user in setting up a configuration.

Timeseries are matched on the following keys:

The handling of the time series is carried out in two transformation steps:

The above example illustrates that using the exact same timeseries as the resulting output timeseries in two separate transformation sets is allowed. The same could also be achieved through two different module instances, but would obviously lead to additional modulInstanceId's.

Handling of this case is straightforward. When in a single transformation module multiple transformationSets are configured having the exact same timeseries as a result, it may be safely assumed that the last timeseries is the principal result timeseries. The other timeseries may be skipped in the analysis.

Handling of this case is straightforward. When in a single interpolation module multiple interpolationSets are configured having the exact same timeseries as a result, it may be safely assumed that the last timeseries is the principal result timeseries. The other timeseries may be skipped in the analysis.

There are a number of special cases, exceptions to a general rule, that must be handled correctly by the analysis.

General rule: each module requires an input and an output timeseries.
Special case: some module may obtain data from other sources or may not produce a timeseries. The special cases are given the table below.

For each workflow in the configuration, all module instances that are used are shown in the order in which they are used. These are displayed in the left pane of the window: 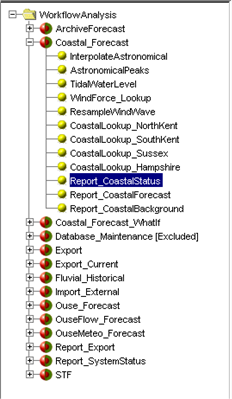 The Configuration Manager configuration allows certain workflows to be specifically excluded from the analysis. In some cases this is required of the workflow would create cyclic references that cannot be resolved internally. In the above example, this is the case for the database_Maintenance workflow.