This functionality is available from Delft-FEWS version 2015.02 onwards.

Validation Status should support the users in their specific validation practices and allow the users to confirm that the data has been adequately validated. The following use cases will be supported:

The validation procedure of an organisation can consist of various (serial) validation tasks: Primary/Secondary validation, transformation interpolation of data, visual inspection, ... In the end, a validated timeseries will possibly have a quality flag (Reliable/Doubtful/Unreliable/Missing) as a result from the validation process. Since version 2012.01 FEWS stores not only the quality flags, but also the source of the flag, the so-called flagSource. So the user is able to see why a certain value is validated as unreliable, eg. due to exceeding of the hard max. The regular flagSource (which is visible in the Delft-FEWS interface as the 'Validation' item), in combination with the quality flag is therefor a summary of the validation process.

FlagSource columns can be defined in a dedicated flagSourceColumns regional configuration file, see FlagSourceColumns in the Configuration guide. These flagSource Columns are stored for each timestep for all timeseries that have been validated in the FEWS database. Various configuration options allow the user to harness the Validation Status in the operational process, either by visualisation, export, conditional filtering in transformations, etc.

The following principles apply and options are available:

All Validation Status related configuration options are optional. When flagSourceColumns are not defined in the configuration, they will not be used by Delft-FEWS. When timeseries in a database contain flagSource Columns which are not configured, they will be ignored by FEWS.

Specific flagSource related functionality will not be available to users when the flagSourceColumns file is not configured.

A validation step where a flagSourceColumn has been defined will write the appropriate flagSource in case of a flag change, both to the flagSource column and the regular flagSource element.

This ensures that the regular FlagSource element (visible to the user in the FEWS interface with the 'Validation' option) remains a summary of the validation status.

FlagSource columns are configured using an columnId and a storageKey

The Id of the column is only used to reference this column from the rest of the configuration. This id is not stored in the database. This id can be changed at any time without the requirement of deleting the datastore.

The storageKey is an integer between 0 to 127 that is used in the datastore to reference a columnId. After changing this key you have to delete the local datastore and MC database.

The flagSourceColumns can only contain the existing flagSources. Also see D Time Series Flags. These flagSources will automatically be set to the flagSource Column when a flag is changed in the respective validation step

Validation Status as a condition

By defining a 'visibilityControllingFlagSourceColumnId' element in the timeSeriesSet, the existence of a flagSource Column for a particular timeseries (step) can be used as a condition for for example a transformation. When the configured  flagSourceColumn is not existing for a particular timeseries step, the value will be perceived as 'Missing' for the transformation. All values that did not pass this validation step are removed on read. They are set to missing for equidistant timeseries and removed for non-equidistant timeseries.

This element can also be used to prevent non-validated data to be exportable through a PI-Webservice. If the timeseriesSets in the filterId that is used for the Webservice are configured with a visibilityControllingFlagSourceColumnId, timesteps that do not have the correct validation status will not be exported.

The interpolation serial transformation also has the possibility to assign a custom flagSource to a flagSourceColumn for interpolated values.

It is possible to include an explicit manual validation step in the validation procedure using the 'Mark' option that is available in the toolbar when the timeseries display is in edit mode and flagSources have been configured. This allows the user to set a flag (or not) for selected timeseries and timesteps and at the same time indicate for what flagSource Column (e.g. 'Visual_Inspection') which flagSource (e.g. 'OK') should be written. 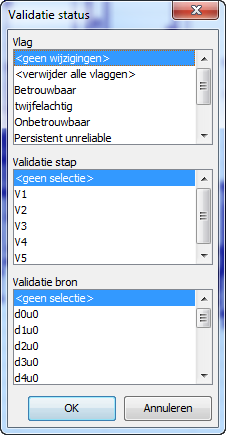 When a data value is deleted (either by the user or by a different action), the flagSources for that timestep will remain. For an individual value in the time series table, the history of that value can be shown using the right-mouse menu - Show history (CTRL+H). This menu also shows the 'state' of the flagSourceColumns for each time the value was changed in the datastore.

Since 2016.01 it is possible to open up 'Time of Validity' (Tv) related functionality in the timeSeries display, by configuring a timeOfValidity element in the flagSourceColumns.xml configuration file. 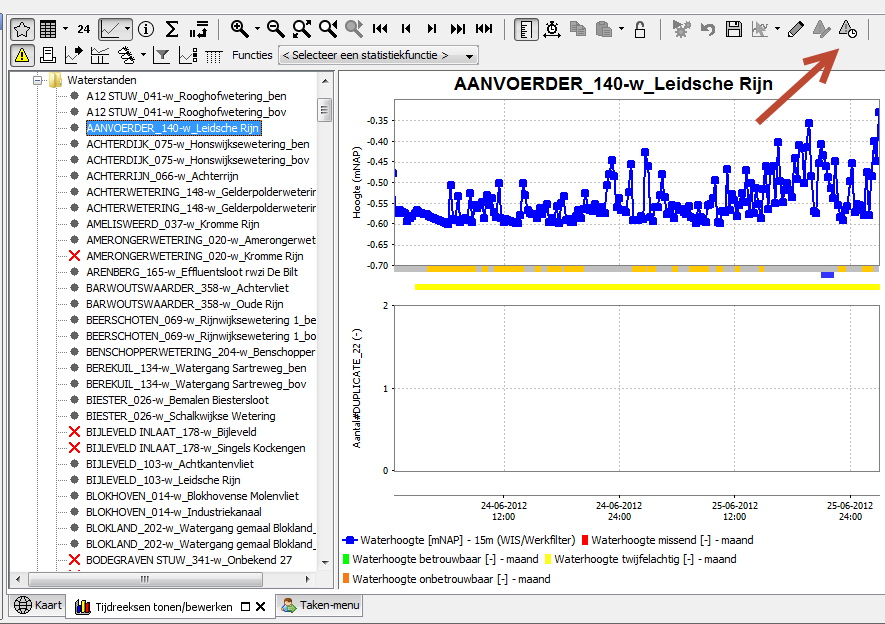 Besides the functionality as described below, when the Tv button from the toolbar is activated, the time series display will be set to 'edit mode' automatically.

The Tv (Time of Validity) for a display node needs to be calculated by aggregating the Tv's for all the timeseries displayed under that node. Display nodes are configured in the displayGroups.xml configuration file.

Time of Validity in Database Viewer

The position of the Tv time will be either before or after the displayGroupName and can be toggled through the right mouse menu ('Time of Validity position'). The dateTimeFormat as defined in the Explorer.xml configuration file is used, where the :ss (seconds) is removed. The color of the time will be the same as the Tv marker (and black by default, when the Tv marker is not configured).

Recalculation and displaying the (updated) Tv  takes place after every save action. 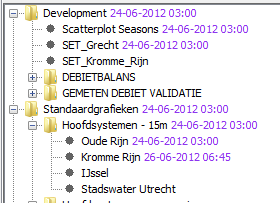 Ordering of display nodes based on Tv

When the Tv mode is activated, the displaygroups nodes are dynamically ordered based on the Tv of that display node

It is noted that the this automatic ordering of the display nodes within a (sub)directory will only be executed at the moment the Tv button is selected. When a validator wants to update the sorting, the Tv button can be de-activated and activated again.

Also, when Tv button is selected, the cursor will default to the last timestep of the view period, whenever:

Note: the cursor will update to the last time step for which data is available

When the Tv button is selected, the user is able to update the flagSource column related to Tv for all timesteps up to the current position of the cursor (current selected timestep) with the defaultFlagSource as defined in the flagSourceColumn configuration file.

The update will only take place for the view period of the display. When this update function is used when Tv is outside the view period of the display, a pop up will be displayed warning the user that a validation gap would be created. The update action will not be performed in this case. This might for example happen when the validator updates the flagSourceColumns using the functionality described above - without saving. Delft FEWS does not know in that case that the Tv should be updated, as the Time of Validity is only recalculated after the timeSeries have been saved.

In the FEWS client, it is possible to use the validation status as a condition for the interactive export. A specific flagSource Column can be selected which is used as a filter for the export. The flagSource Columns are included for the PI-XML data type and will always be exported when available. The GeneralCSV datatype can be configured as an interactive export type as well. The flagSource columns that should be exported can be configured in the explorer.xml configuration file. 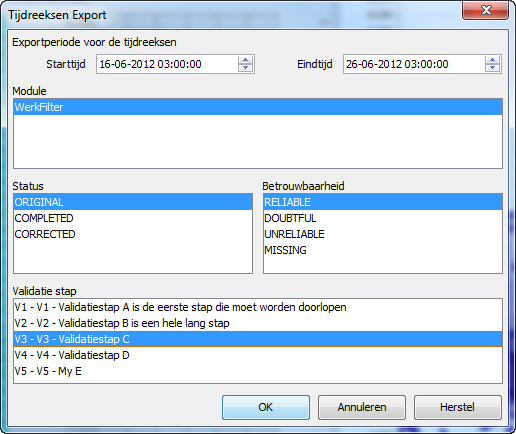 In the regular timeseries exports, the export of flagSourceColumns is supported for the PI-XML format and the GeneralCSV format. In PI-XML, the flagSource columns will always be exported. When exporting using the generalCsv export format, inclusion of flagSourceColumns can be defined in the configuration with the use of Table Layout.

The flagSource Columns are included for the PI-XML data type and will be imported.

Below is given an example on how to configure a generalCSV import with flagSource columns.

The CSV file for this example could look like this:

Copying of flagSource columns to other timeseries

It is not possible to copy flagSource columns in a transformation to another timeseries.