During flow slides thousands of cubic meters of sediments move within seconds to hours downwards along a submerged slope. Being able to estimate the risk that flow slides pose to flood defences is vital for the safety of low-lying, densely populated coastal regions.

This requires understanding the involved complex processes within the eroding slope and the turbulent water flow above its dissolving surface. A numerical method, the material point method (MPM) which is able to model these processes in a uniform framework is enhanced in this interdisciplinary project for the analyses of flow slides. This requires new solutions for the modelling of turbulent water flow, of soil erosion, transport and deposition and of heterogeneities of the subsoil. Models will be derived from laboratory and field experiments and translated into robust, efficient numerical models. The obtained MPM-based solution, thoroughly validated through experiments, will be provided to experts in industry, consultancy, academia and government agencies. 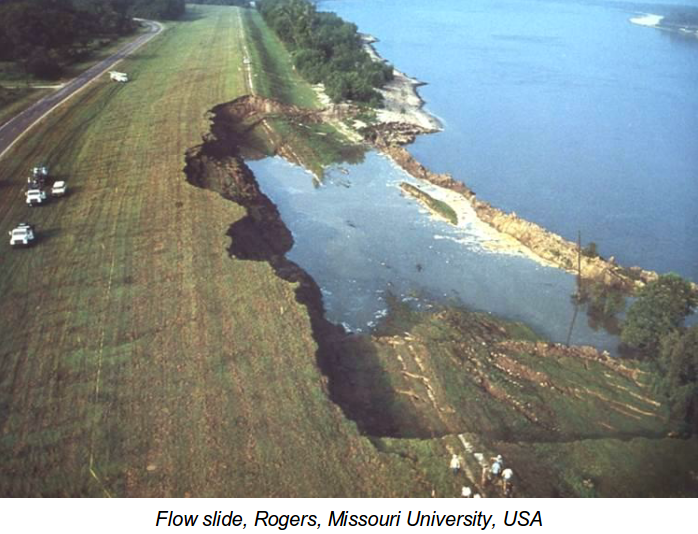 During a flow slide, large amounts of soil move down an underwater slope. A flow slide is able to remove an entire dike or dune section which poses a severe threat to the water safety of low-lying countries. The ability to predict flow slides is an important asset for the design of flood defence measures, their construction, maintenance and safety assessment; even more so in view of intensifying land use and the impact of climate change on low-lying coastal areas worldwide.

Flow slides are not yet well understood. Their study requires an integrated approach of fluid and soil mechanics; soil movement induces turbulent water motion which in turn interacts with the eroding soil surface. Currently, such an integrated approach is lacking. Studies so far mostly rely on empirical approaches that apply to specific circumstances only and use considerable simplifications. Physical experiments involve high costs as scale effects necessitate large test facilities and such tests often only allow predictions for specific projects. This makes the safety assessment of flood defences and the development of measures to prevent flow slides difficult and costly.

In the proposed interdisciplinary project, an integrated numerical solution for the simulation of underwater flow slides from initiation up to deposition of sediments will be developed through enhancement of a numerical method, the so-called material point method (MPM). Laboratory experiments will be performed to gain deeper insight into soil and fluid mechanical processes that occur at the onset of and during flow slides. They further serve for the validation of the developed numerical solution method. New physics-based models for soil-water interaction, soil heterogeneity and turbulent flow as relevant to flow slides will be formulated and existing models will be extended. They will be translated into purpose-built, efficient algorithms to be integrated into available Anura3D MPM software.

The devised enhanced Anura3D MPM software is a 3D generic numerical method for integrated geotechnical and hydraulic analyses that can also be applied to other erosion processes than flow slides. It will for example also be of benefit to the Dutch offshore industry. Numerical analyses will help to raise the level of confidence in innovative technologies, e.g. for scour protection, protection of offshore pipelines, dredging and the exploration of hydrocarbon reservoirs. Furthermore, advanced mathematical solutions developed in the frame of this project are expected to find their way into other commercial software, e.g. the Plaxis FEM software for geotechnical applications.

With regard to academia, this project prepares the ground for future high-level national and international collaborations between applicants and academia as well as the high-tech industry.

Much  progress  has  been  made  throughout  the  last  decades  in  numerical  analyses  of geotechnical problems including problems that involve groundwater flow, for example by the Plaxis 3D FEM software. Simulations of fluid flow in hydraulic engineering applications based on solution of the Navier-Stokes equations reached a high level of sophistication, for example with the Delft3D computational fluid dynamics (CFD) software. However, no integrated solution exists to date for the combined modelling of deformation of water-saturated soil and flow of free surface water, the transition between the two. Soil-water interaction, i.e. erosion and sedimentation, is currently modelled with available software on the basis of empirical relations rather than a consistent continuum mechanical description.

A solution which is based on interfacing geotechnical engineering and CFD software is not straight forward. Geomechanical problems require a Lagrangian description and the widely used finite element method (FEM) is commonly used for their solution. CFD software follows an Eulerian approach and commonly uses a Finite Difference scheme. Combining such differing approaches renders numerical inaccuracies. In the proposed project, a novel integrated numerical solution for the analyses of underwater flow slides from initiation up to deposition of sediments will be developed on the basis of present numerical state-of-research approaches.

Throughout the last years considerable progress has been made in numerical analyses of geotechnical problems involving large deformations of water-saturated soil by means of the Material Point Method (MPM). MPM is closely related to FEM. It combines the Lagrangian approach of FEM with the Eulerian approach of particle methods such as SPH  (smoothed  particle  hydrodynamics).  Equilibrium  equations  are  solved  on  a background finite element mesh as with FEM. A cloud of material points that moves through the mesh is used to model arbitrary large  deformations of soil, or flow of water. Mass conservation is implicitly obeyed. A separation of material, gapping or erosion-like processes is implicitly included  in  this mixed Lagrangian-Eulerian  approach. It furthermore features a straightforward soil-structure and water-structure contact formulation. Several highly non-linear density dependent strain softening models are available. They are well suited to model sand. MPM has been extended for coupled 2-phase analyses. Recently, it was found that this numerical method is well suited to simulate problems of erosion and sediment transport. Soil with water flowing through its pores, fluidized soil and the transitions between the two states are modelled in an integral numerical framework. Such an MPM suited for first simulations of flow slides of homogeneous sediments is  currently developed at Deltares  together with the Anura3D MPM Research Community (www.Anura3D.com).

The Anura3D MPM software will be used in this project for the numerical analyses of flow slides and other problems of erosion. This however requires significant enhancement of the MPM code through integration of existing physics based models and new models developed in the course of the project.

Extensive validation of the Anura3D MPM software will be performed in the course of this project. The planned simulations of laboratory and field tests as well as case studies provided by industry will be highly complex, requiring good understanding of the numerical method and the considered problem. As a starting point, simplified benchmark problems based on analytical solutions will be used for validation. Here, the available Anura3D MPM code can be used. As the enhancement of MPM proceeds, the complexity of analyses will be gradually increased from laminar to turbulent flow, from homogeneous to heterogeneous soil, from the available simplified state transition criteria to more sophisticated solutions.

Anticipated long timeframes and large dimensions of flow slide analyses as well as the complexity of the considered equilibrium and transport equations requires highly advanced, purpose-built numerical solutions in order to obtain usable, i.e. stable, software allowing for analyses whose computational effort is affordable and computation time remains within a reasonable timeframe.

The numerical integration of the dynamic equilibrium and transport equations over time involves advancement of the solution in steps. Depending on the differential equation and time integration scheme, different constraints are placed on the time increments to ensure stable solution. For propagation of waves in soil described by hyperbolic differential equations a different criterion applies than for dissipation of pore water out of soil, described by a parabolic equation. For implicit and explicit schemes different parameters of a problem are known to limit the step size, e.g. stiffness of soil. The impact of other parameters such as soil permeability is not well understood yet.

In principle two methods are used for the analysis of the stability of time stepping methods: 1) methods based on the amplification factor of the integration method combined with an estimate of the eigenvalue of the corresponding (linearized) space discretisation method or 2) a Fourier analysis. Gained insights can be used to invent more stable integration methods.

Another problem lies in the transition between soil filled with pore water whose mechanical behaviour is described by equilibrium equations of the soil-water mixture and fluidized soil described by the Navier-Stokes equations along a moving interface. This is presently modelled in a simplified, discretised way. State transition is detected on the basis of a threshold porosity of the soil. Here, an accurate, robust solution has to be developed that takes into account a gradual transition between the two states.

3) Integration of results into MPM

Integration of results into the Anura3D MPM involves extension of the MPM code or development of libraries which are linked to the MPM code. Special attention will be paid to efficient parallelisation of the code to be able to make optimal use of available state-of-the-art computer facilities. Sets of benchmark tests will be assembled for respective code extensions to prove their proper working. Extensions will be thoroughly documented and coding guidelines will be applied to ensure a high degree of quality of the implemented solution. 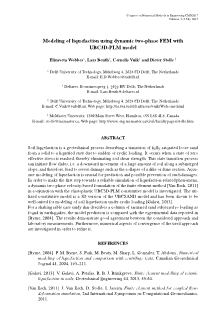 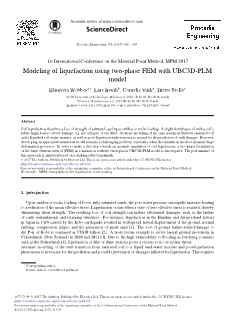 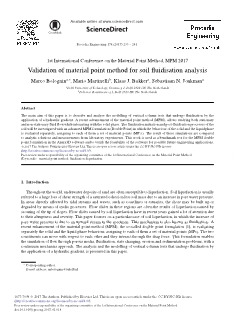 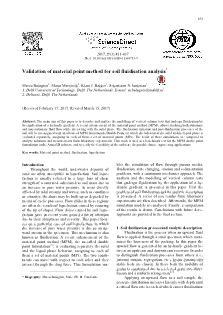 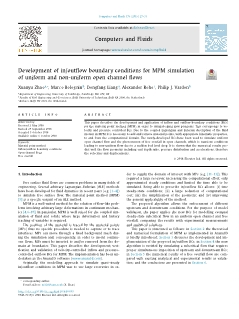 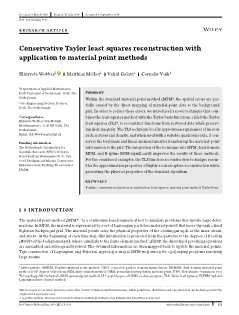 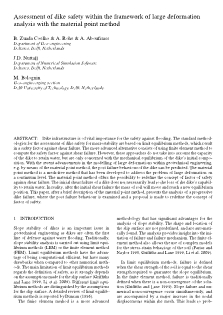 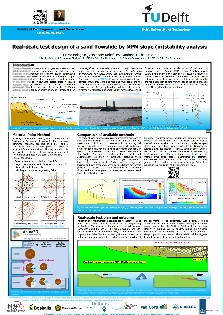 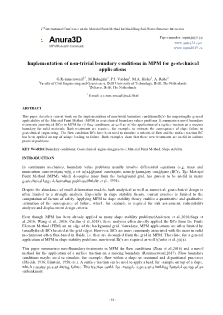 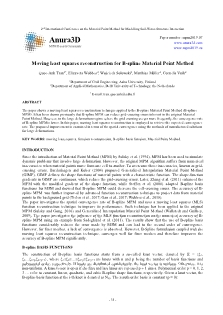 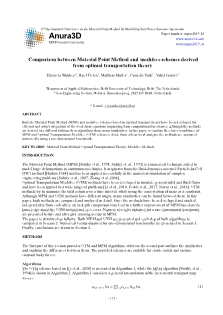