This display is used to apply changes to time series within the FEWS database. the definition of modification to a time series is that a change is made to that time series without actually editing the values themselves. The changes are established as a "description of the change". This could be for example the increase of an observed level by 2 cm over a given time period. It could also be applied as an edited time series to replace the original time series. On retrieval of a time series from the database, the data access layer checks if there are any modifiers applicable to the data being extracted. If relevant modifiers are found, then these are applied before the data is passed to the module that has requested the data. The module itself is not "aware" that the data has been amended by a modifiers. The diagram below illustrates this process.

Modifiers can be entered and managed through the Time Series Modifier Display.

Modifiers are defined through the modifier display, which can be opened either through the FEWS explorer menu, or through the toolbar on the main window (when configured). 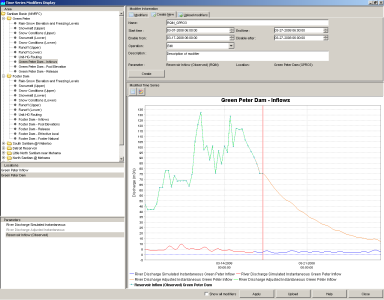 Once a display has been selected, the locations panel will show all locations available in the display group selected. Select the desired location.

Once a parameter has been selected, the parameters panel will show all parameters available at the locations selected. Select the desired parameter.

Following selection of the parameters the selection will be visible in the Create New tab of the Modifier information panel.

To create a new modifier, select the time series (location & parameter) to which the modifier is to be defined.

Open the Create New tab in the Modifier information panel.

Select the name of the modifier. On selection the name defaults to a combination of the location Id and the parameter Id.

Enter an appropriate description for the modifier. This is optional and can be displayed later when managing existing modifiers.

Define the start time and the end time of the data to change. By default the times defined are equal to the time series displayed in the main window.

Define the start time and the end time of the validity period of the modifier. By default the times defined are equal to the time series displayed in the main window.

Select Create on completion of the modifier.

A modifier is applied to the original data for a defined time span. This is defined as a start time and an end time. These times relate to the data in the time series, and not to the time on the computer.

The start and end time can be changed by entering the date and time values in the appropriate input boxes. These can also be changed by clicking on the display. Through the right mouse button a menu is available that allows selection of either the start time or the end time.

Start and end times selected are displayed as vertical lines in the display. 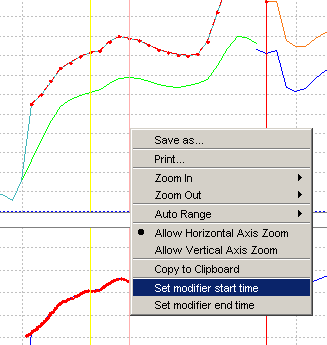 By default the modifier is valid for the same period as the start and end time of the modifier. However, a modifier can be set to be valid during a different period than the data to which it applies. A modifier will only be applied to the data if the Forecast T0 of the workflow falls within the valid period.

The period of validity can be entered as a start and end time in the appropriate text fields.

The time series modifier display allows the data to be edited interactively. Once the Edit operation has been selected, data can be manually edited in two ways.

To enter data by clicking on graph, choose the Enable chart editing option. Use the mouse to draw the changed data on the display.

To enter data by entering data in a table, select the Enable table editing option. Enter the changes through the table. The column that contains the location & parameter selected is shown with the values against a white background. All other columns remain with a grey background.

Once editing the data is complete, select the Create button to add the new modifier.

Modifiers that are available for use are preceded with a green square.

The remaining columns of this tab show the relevant details of the modifier. Each modifier can be enabled or disabled using the Active option.

When hovering over the information icon a pop-up is displayed with the description entered previously. If no description has been entered this icon is greyed.

A modifier can be deleted through the red cross in the last column.

Note that if there are modifiers that have only a temporary status, the name of the tab will be marked in blue. Once these have all been Applied the colour of the text will revert to black.

Modifiers defined on the local client will only be available on that client until these have been uploaded to the central database. Through the Upload Modifiers tab the modifiers which are considered to be used in forecast and historical runs on the central server system can be selected and uploaded.

Once modifiers have been saved locally using the Apply button, these are available for uploading. This displays only those modifiers that have not yet been uploaded. The modifiers to be uploaded can be selected using the Upload option. Select the Upload option to send these to the central database and use throughout the system. Following upload the modifiers will be removed from the list displayed in this tab.

Multiple modifiers can be applied to the same location & parameter. However, these will not be applied cumulatively if there is an overlap. In case of an overlap the last modifier defined that is active will be applied.

Once a modifier has been defined it cannot be changed. At any time the modifier can be enabled and disabled, or deleted.

Making this display available only requires the relevant class be called from the Explorer. It is added as an explorer Task.

An example of the configuration is provided below

Note that the use if Icons and Mnemonics, as well as the name of the display will depend on the configuration.